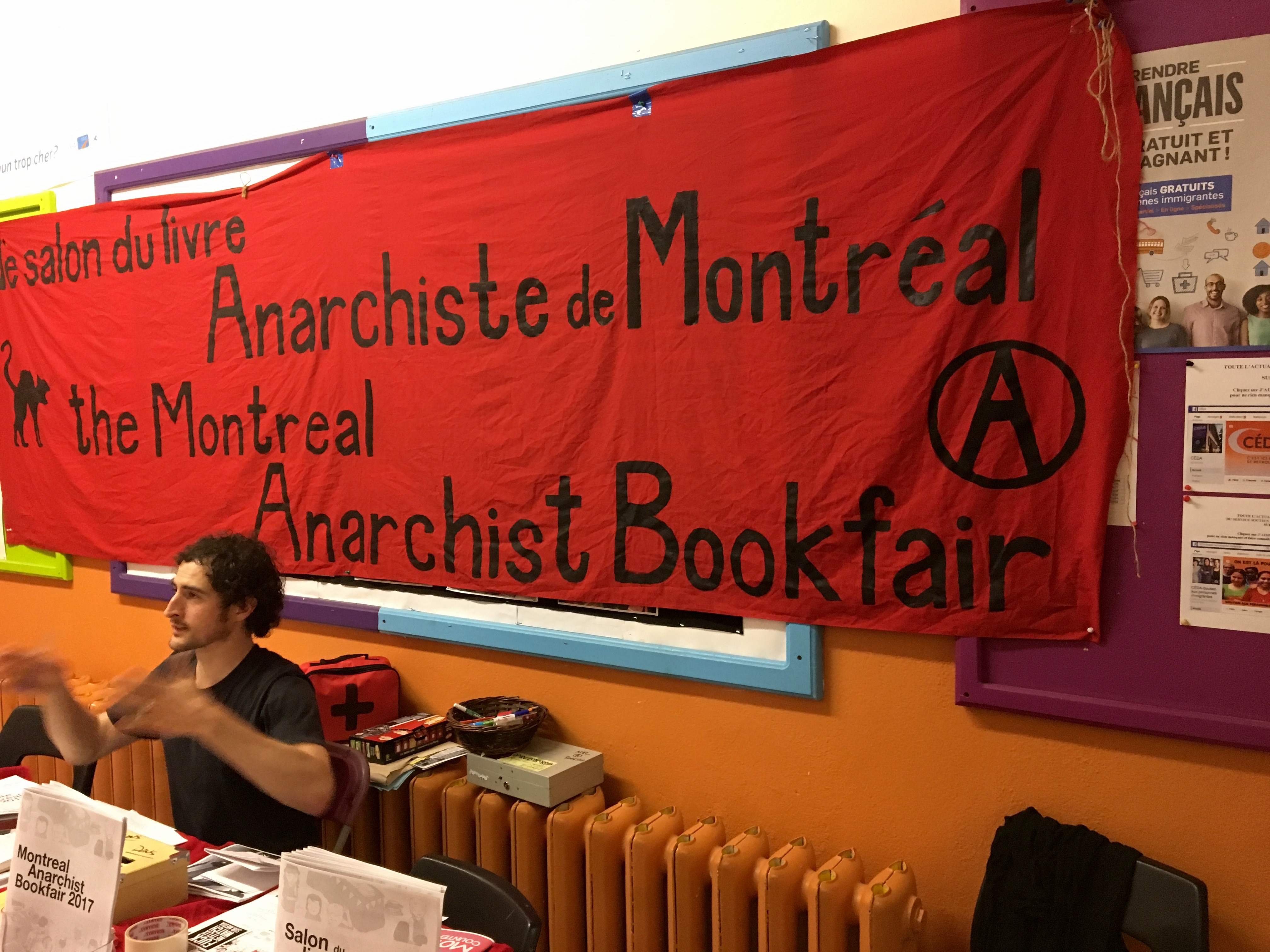 I went to the 2017 Montreal Anarchist Bookfair last May to look for stickers after having gone to fairs there for that purpose every year from 2012 to 2015 (but missing the one in 2016). The fairs feature book publishers, primarily, but some of the vendors also sell or give away stickers (or offer them as PWYW – pay what you will). Others participating in the fair usually include such groups as the Beehive Design Collective, Justseeds Artists’ Cooperative, and the Quebec Public Interest Research Group at Concordia. Several presentations, hands-on workshops, and an art exhibition are also part of every bookfair. 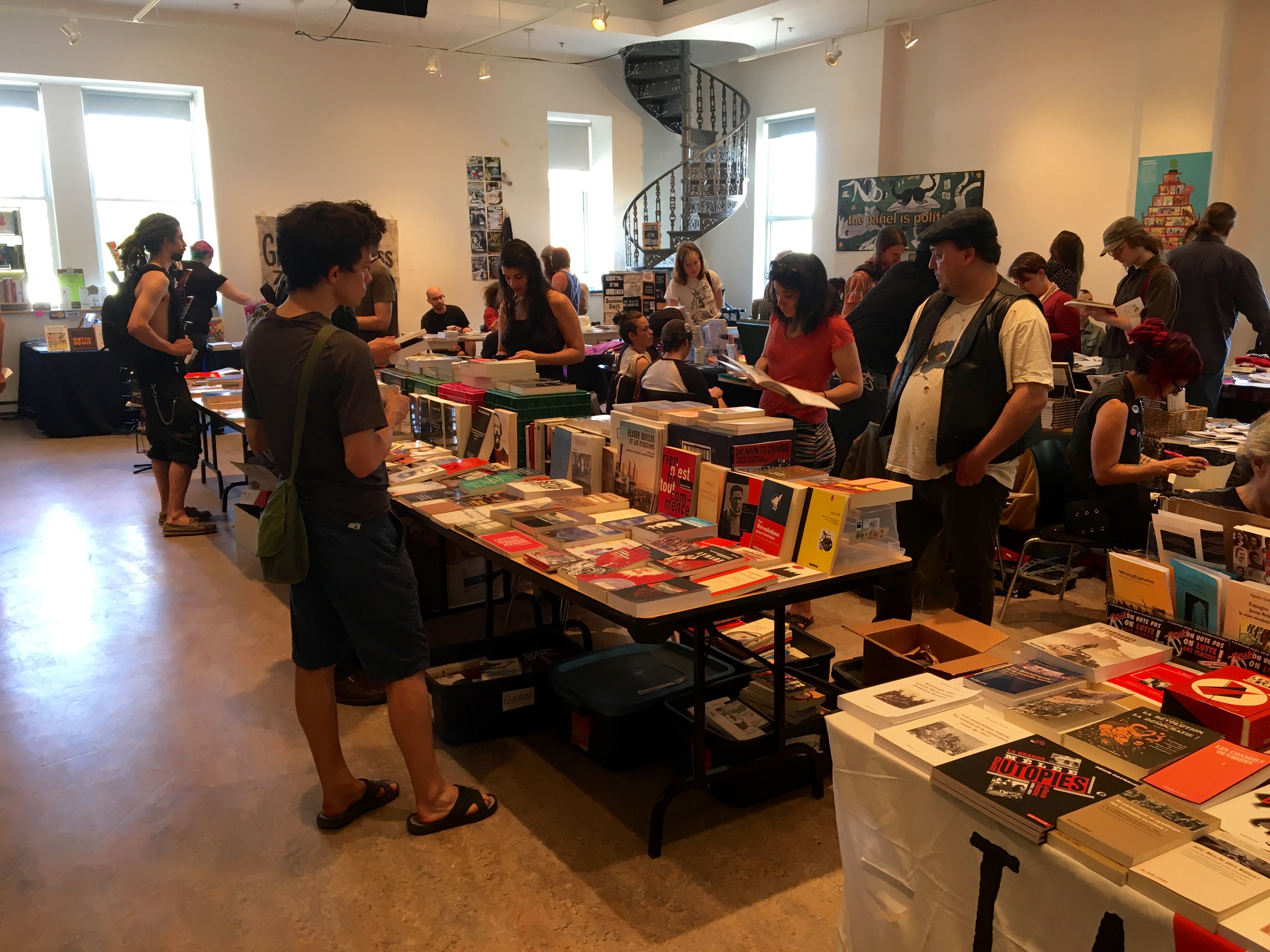 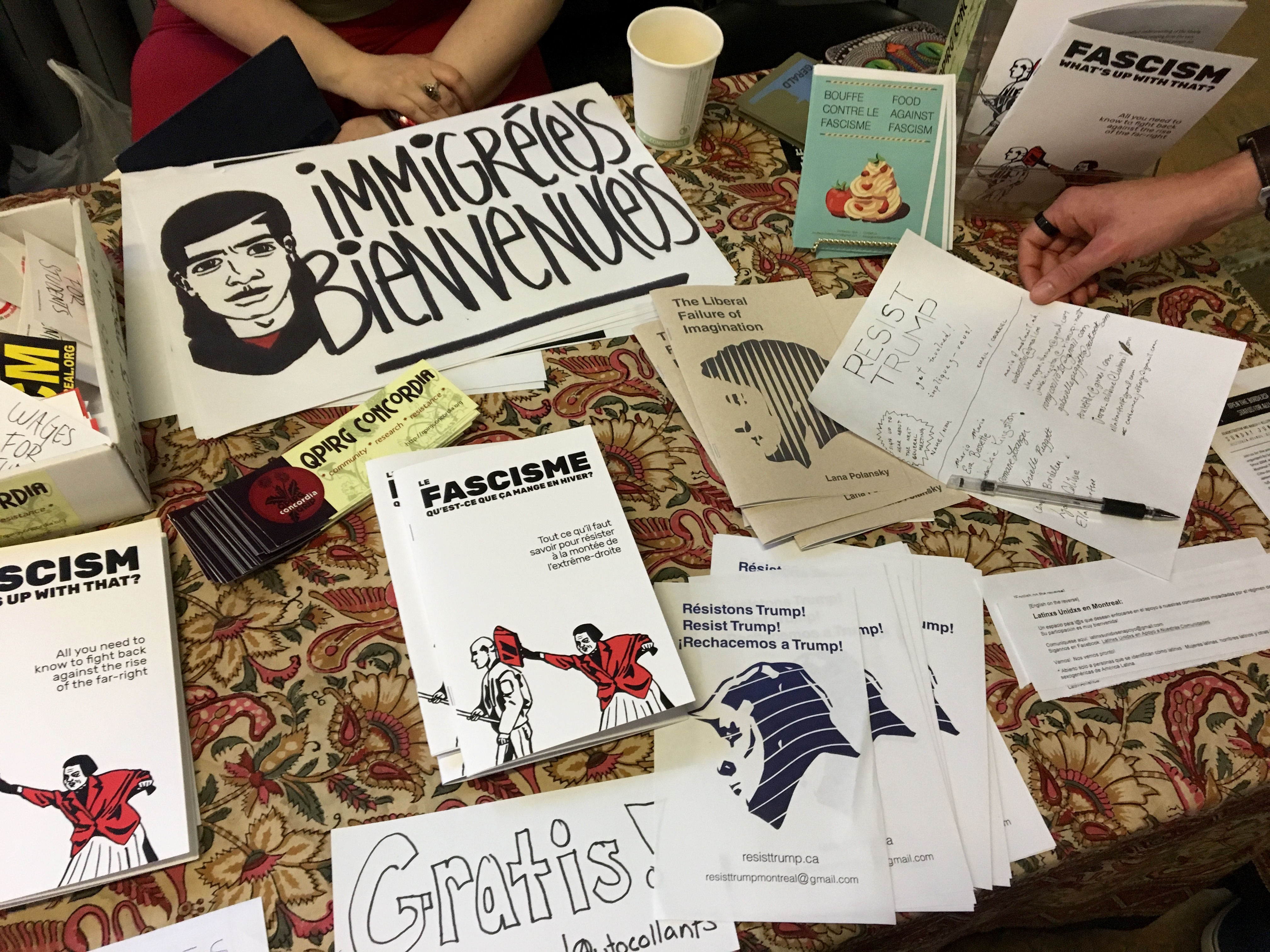 Over the last five years, I’ve seen certain themes emerge in terms of the stickers I collected: students’ rights, police brutality, immigration, and gender/sexuality, for example. Those themes were present again this year, but anti-colonialism also emerged as a theme in response to Canada’s celebration of the 375th “anniversary” of Montreal (see the city’s Alive 375 campaign). Here is the introduction to the program for the bookfair:

“The Montreal Anarchist Bookfair organizing collective acknowledges that we are on the traditional territory of the Kanien’kehá:ka. The Kanien’kehá:ka are the keepers of the Eastern Door of the Haudenosaunee Conferederacy. The island called ‘Montreal’ is known as Tiot:ke in the language of the Kanien’kehá:ka, and it has historically been a meeting place for other indigenous nations, including the Algonquin peoples. The Anarchist Bookfair collective believes it’s not enough just to acknowledge the keepers of this land. We encourage everyone participating in the Bookfair to get informed and educated, and to actively resist colonialism and neo-colonialism in the many forms it takes, and in the diversity of forms that resistance can take, too.” 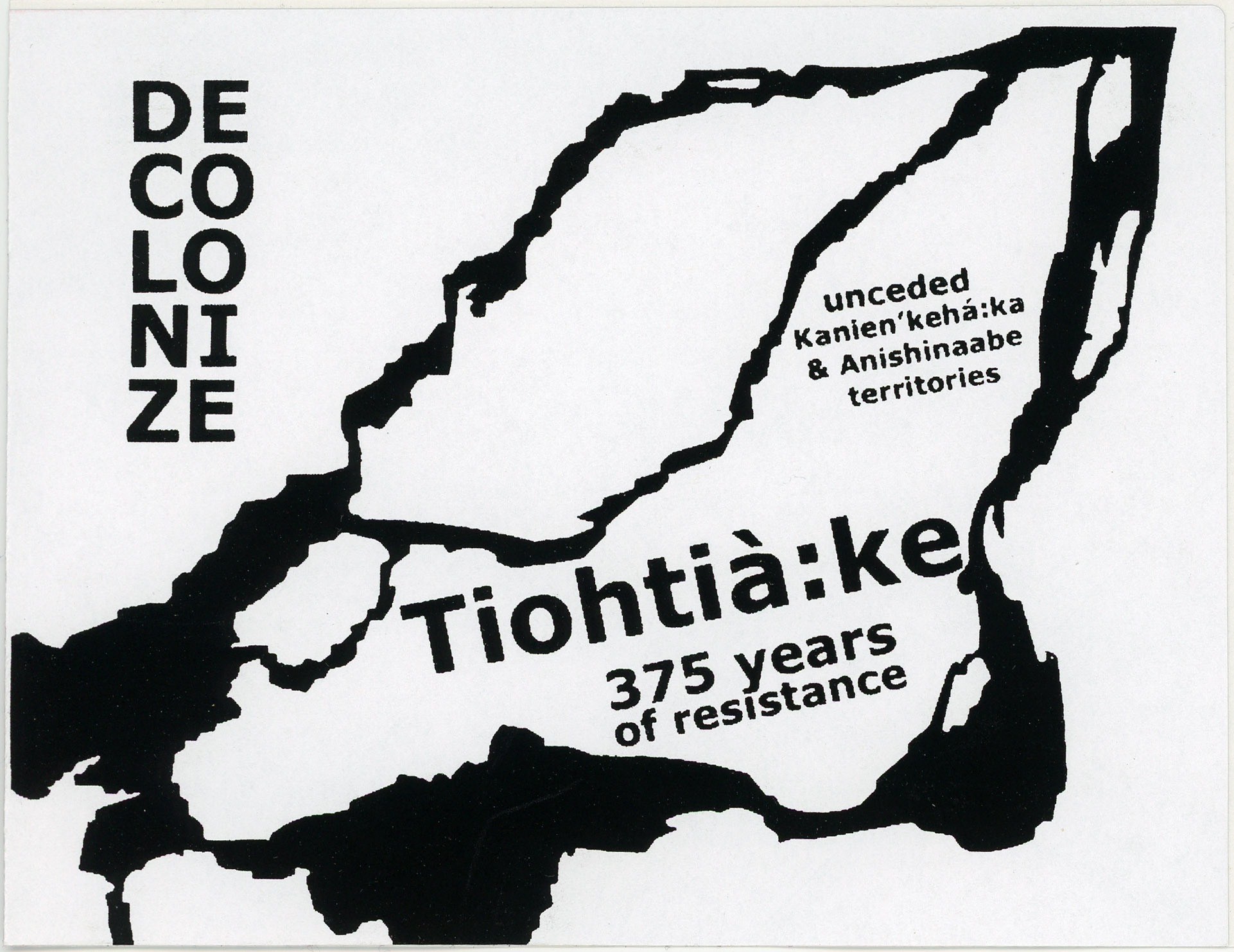 The text above echoes something I heard when I attended the Association of Canadian Archivists annual conference in 2015, during which several panel discussions began with someone saying, [we] “acknowledge this conference is taking place on traditional, unceded territory…”. Actually, as a side note, now that I’m doing research on this topic, I see that Carleton University in Ottawa, Ontario, has a Territory Acknowledgement that states:

“Acknowledging territory shows recognition of and respect for the host nation, the Omàmiwininìwag (Algonquin peoples, in the Algonquin language)…. This acknowledgement appropriately takes place at the commencement of conferences, workshops, public lectures, presentations and other events held on- or off-campus in the National Capital Region, hosted by Carleton University, particularly those pertaining to Indigenous communities, and diversity and inclusion-related events. For speaking engagements taking place outside the National Capital Region, determine which Indigenous territory you are presenting in and make an appropriate acknowledgement for that territory.”

Stickers this year from a group called Anti375 and their statement are shown below: 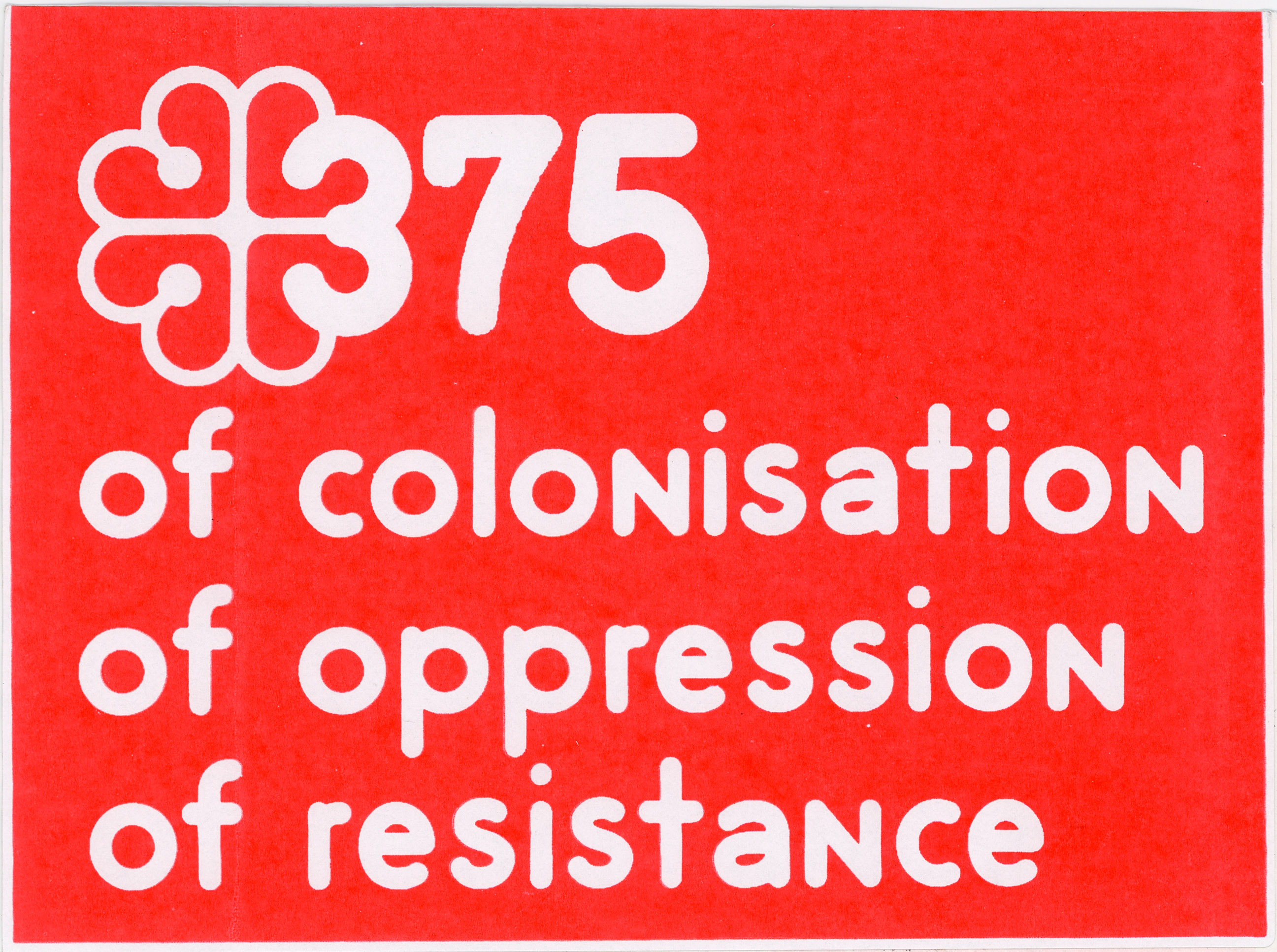 “This street art project aims to dismantle mainstream nationalist ideologies that feed xenophobia, false victimization of white Francophones and the erasure of the violent settler colonial structures. We are planning a series of anti-celebratory street interventions in response to the government’s call to commemorate the so-called founding of ‘Montreal’ in 1642 and ‘Canada’s’ 150th ‘anniversary.’ 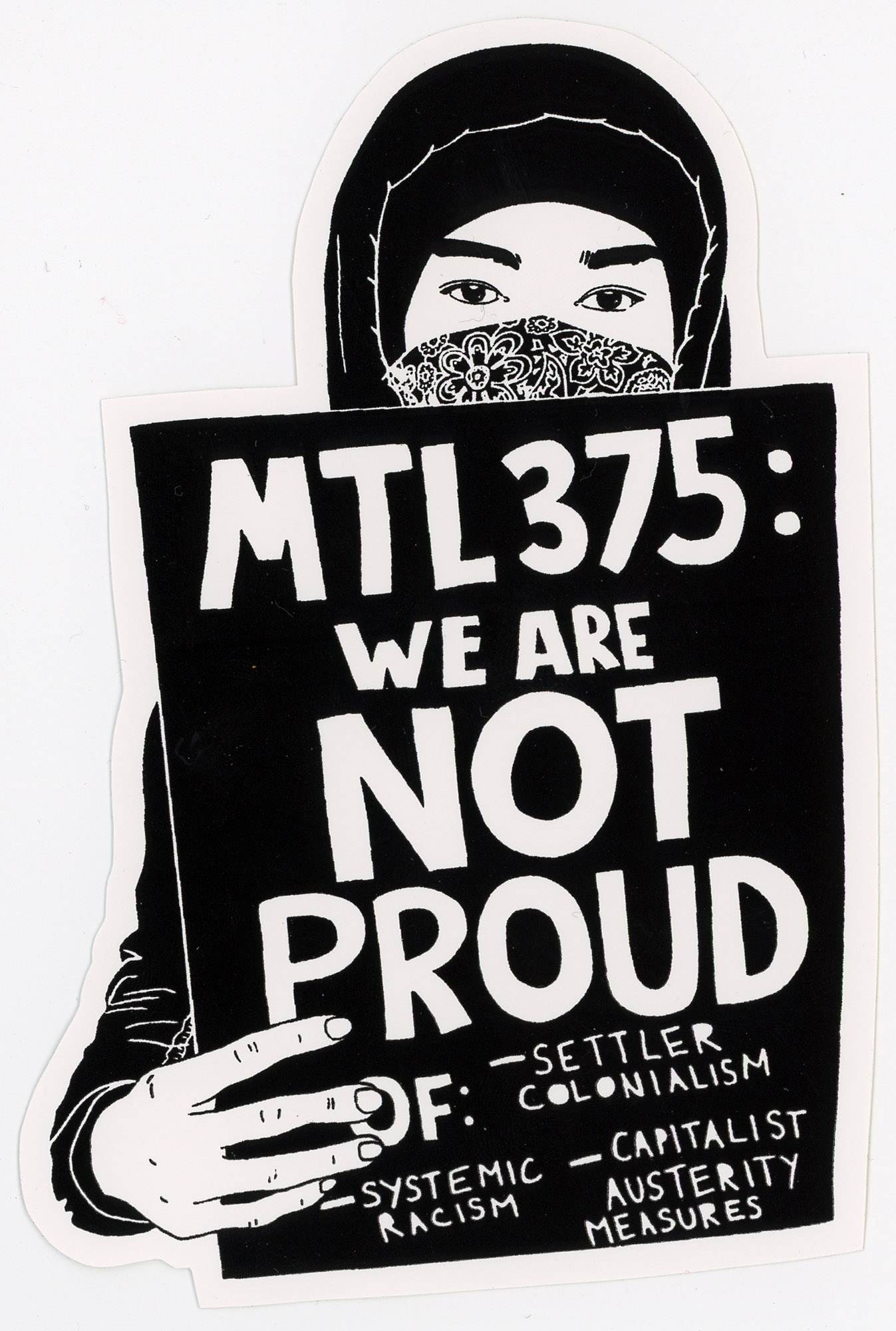 We view the 375th ‘anniversary’ as the legitimization of settler colonialism upon the land. The island of Montreal has many names in indigenous languages: Tiotia:ke, Mooniyaang, Moniak, Moriak… At the crossroads of many Indigenous territories like the Kanien’kehá:ka (south shore of St. Lawrence River) and Anishinaabe (north shore of St. Lawrence River), it was historically a strategic location for commerce. It is unceded territory, which means it was never surrendered or signed away in a treaty. It is imperative that we take action against settler colonial violence by acknowledging the experiences of the First Nations and Inuit, and support the return of the land to its original Indigenous caretakers. In addition, ‘Canada 150’ echoes the federal government’s refusal to address land claims, continuation of environmental racism and lack of adequate support for both missing and murdered Indigenous women and 2Spirit folks, as well as, discrimination against Indigenous children. 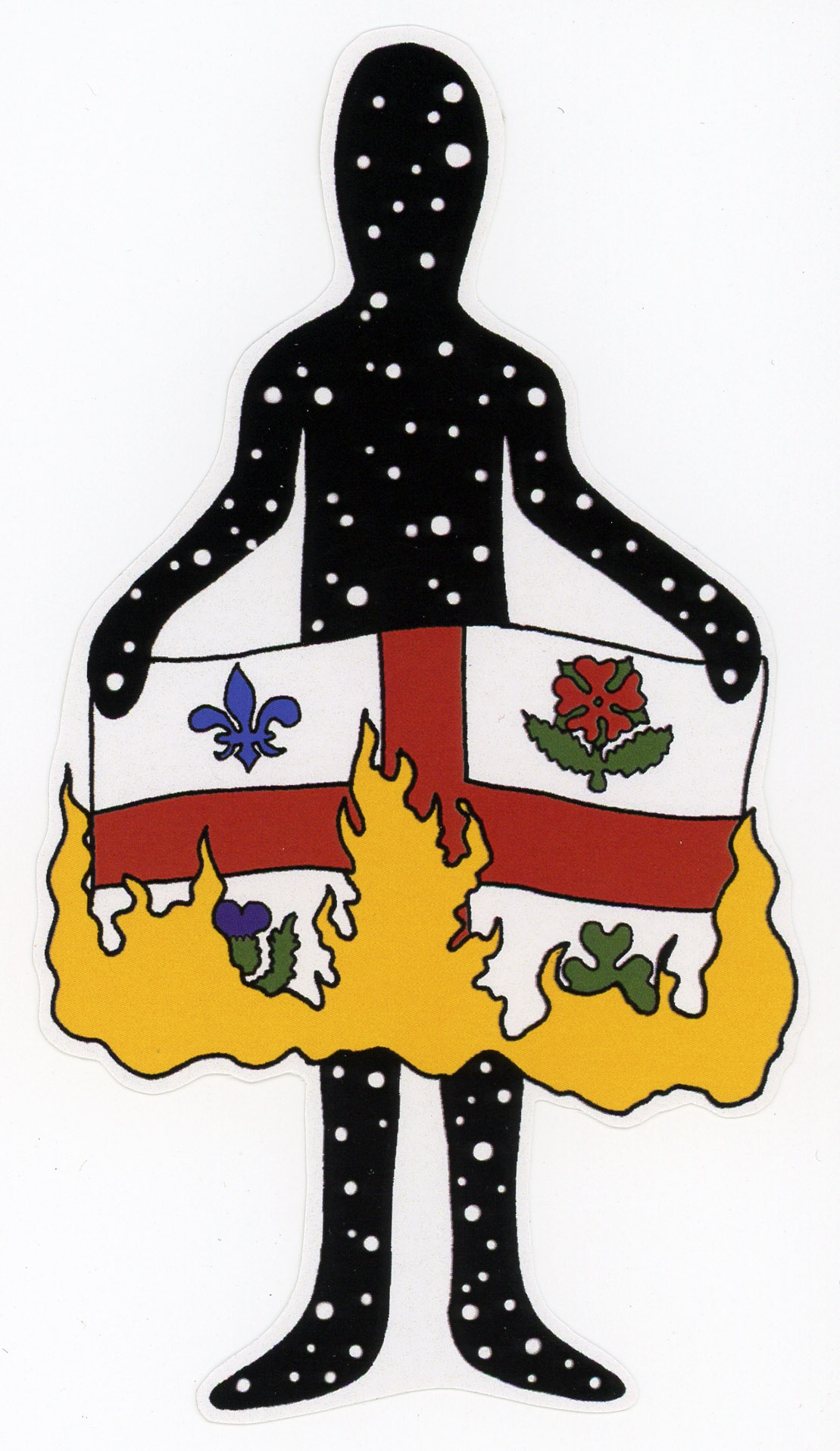 In light of continuing austerity cutbacks to health and education that are destroying the social fabric, we find it morally unjust to celebrate an ongoing capitalism in ‘Montréal.’ Furthermore, the rise of neo-fascist and Islamophobic nationalist groups in Quebec needs to be challenged. Urban areas in Quebec have seen more far-right stickers appear, and mosques have been vandalized countless times. We believe this visual presence is unacceptable hate speech. We have a responsibility to retaliate with counter-messages that go deeper than the liberal propaganda of multiculturalism of the Trudeau, Couillard and Coderre governments.”

Another sticker, this one from Ni Québec, Ni Canada: collectif anticoloniste: