My complacent little bubble world has been turned upside down since the November 2016 U.S. election of #45 POTUS.  As a result, Stickerkitty blogging has been forced to take a back seat to community organizing, weekly conference calls, and desktop sharing technology apps.  In the last six months, I’ve gotten heavily involved in progressive local and regional politics in New York’s Congressional District 21, an area that spans roughly 15,115 square miles across 12 counties in rural northern NY.  NY-21 is the size of a small European country, I learned, about the same size as Switzerland and a bit smaller than the Netherlands.  Unlike other big Congressional districts in the US, however, NY-21’s population is spread evenly over the area with an average of 47 people per square mile.  My own small town of Colton has a population density of six people per square mile, which makes it hard to reach voters, that’s for sure.

There have been protests, marches, and rallies in Canton and Potsdam, NY, since January’s inauguration.  One focused on health care, one on immigration, and one yesterday was held in solidarity with the People’s Climate March in Washington, DC.  Much local effort has focused on holding accountable and unseating Rep. Elise Stefanik (R).  I designed a “Where’s Elise?” poster for the earlier marches using the “Where’s Waldo?” motif to show the Rep.’s lack of appearance and engagement in the district. 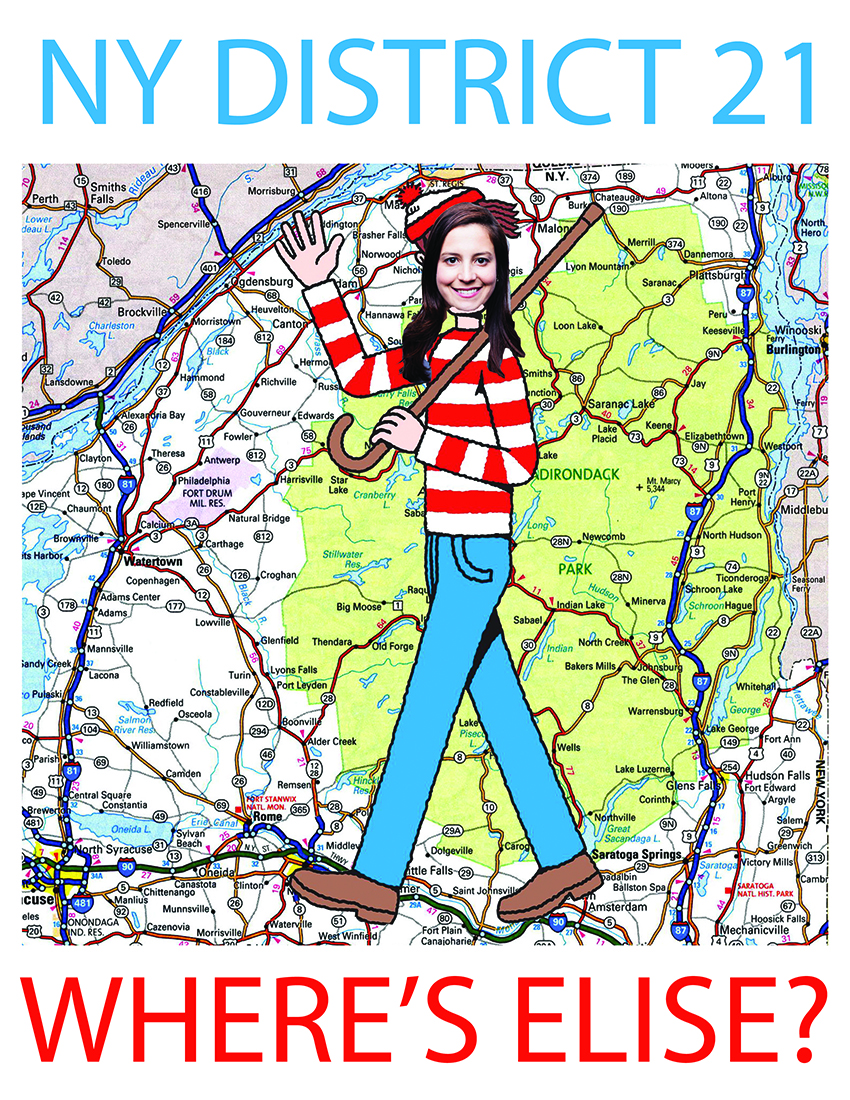 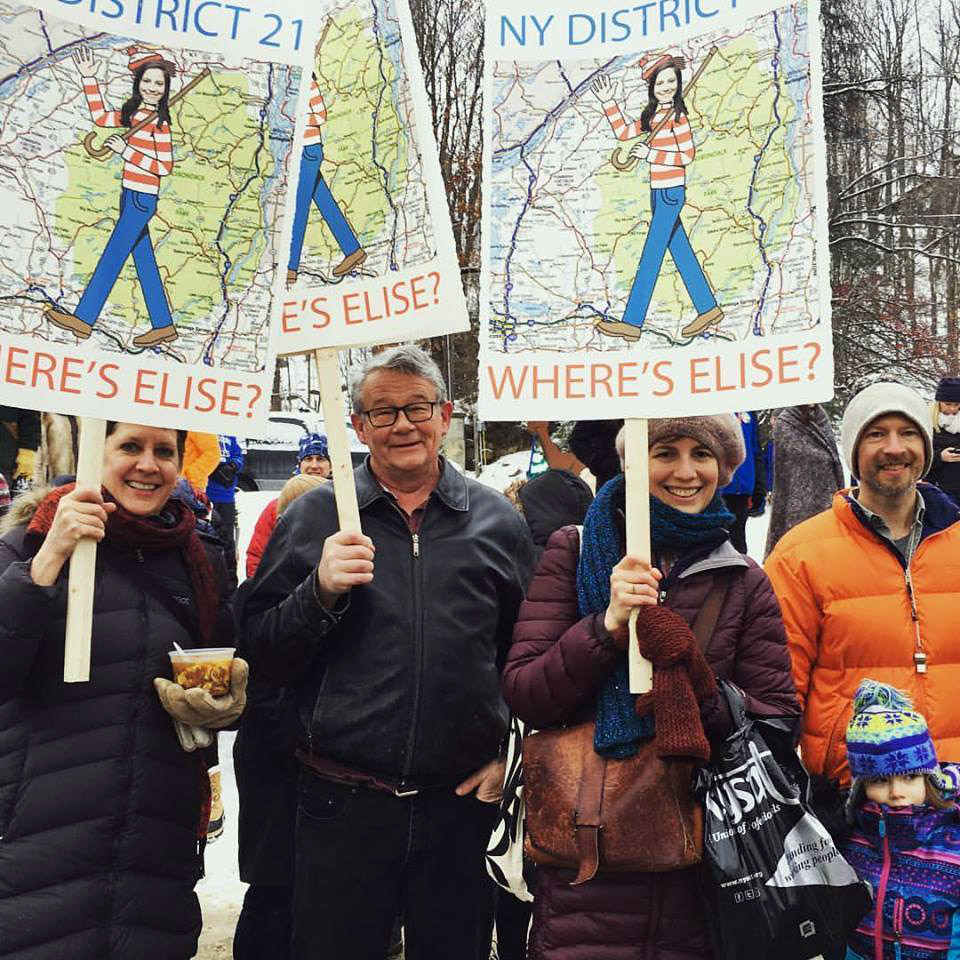 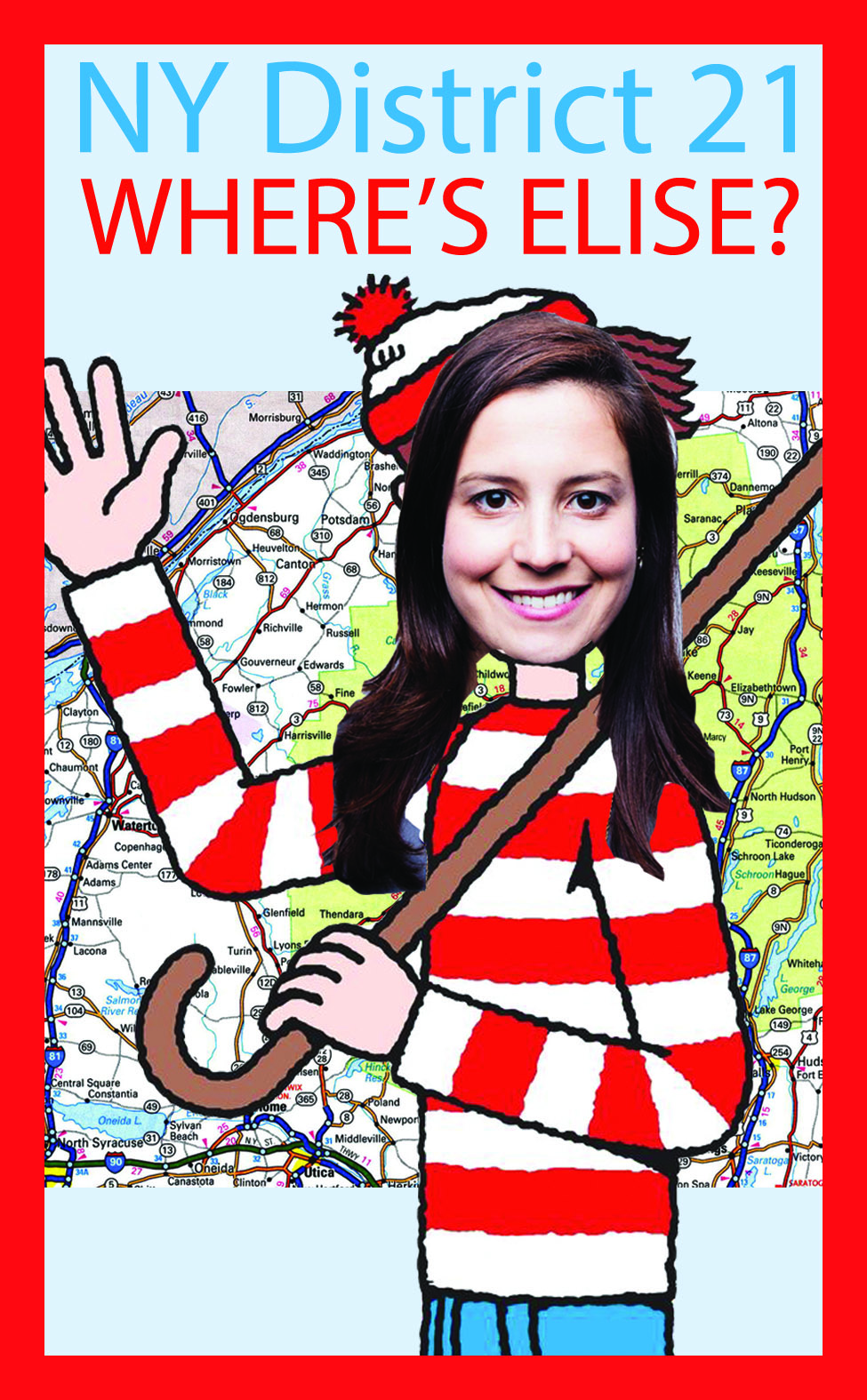 I crowdfunded and raised $400 in two hours on Facebook to pay for 1,000 stickers.  I already gave stickers to the funders, but the rest are now free, so contact me if you’d like some.  Sticker Robot printed the “Where’s Elise?” stickers, the same company that Shepard Fairey used for his iconic Obama HOPE sticker in 2008.  Very high quality! 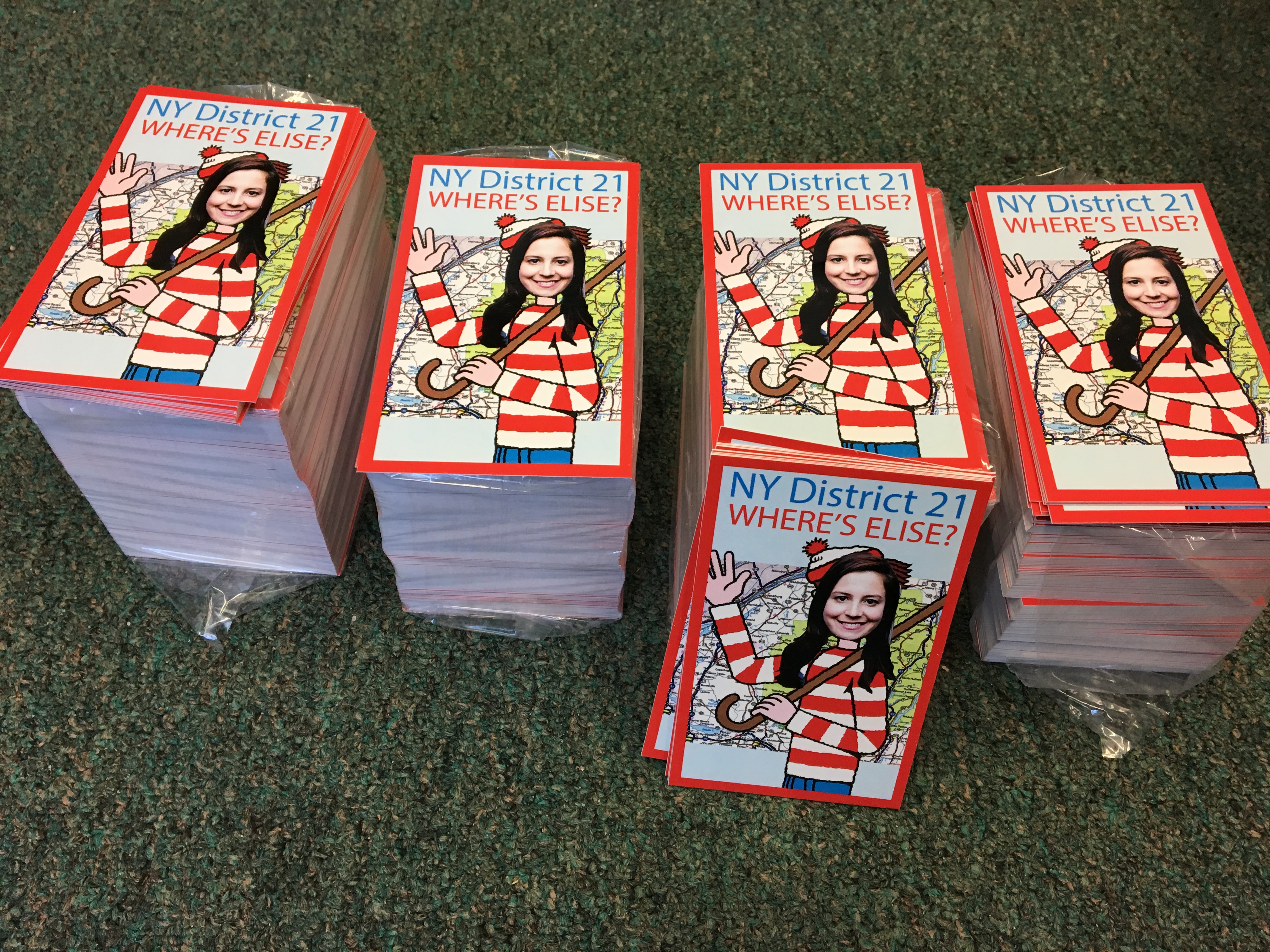 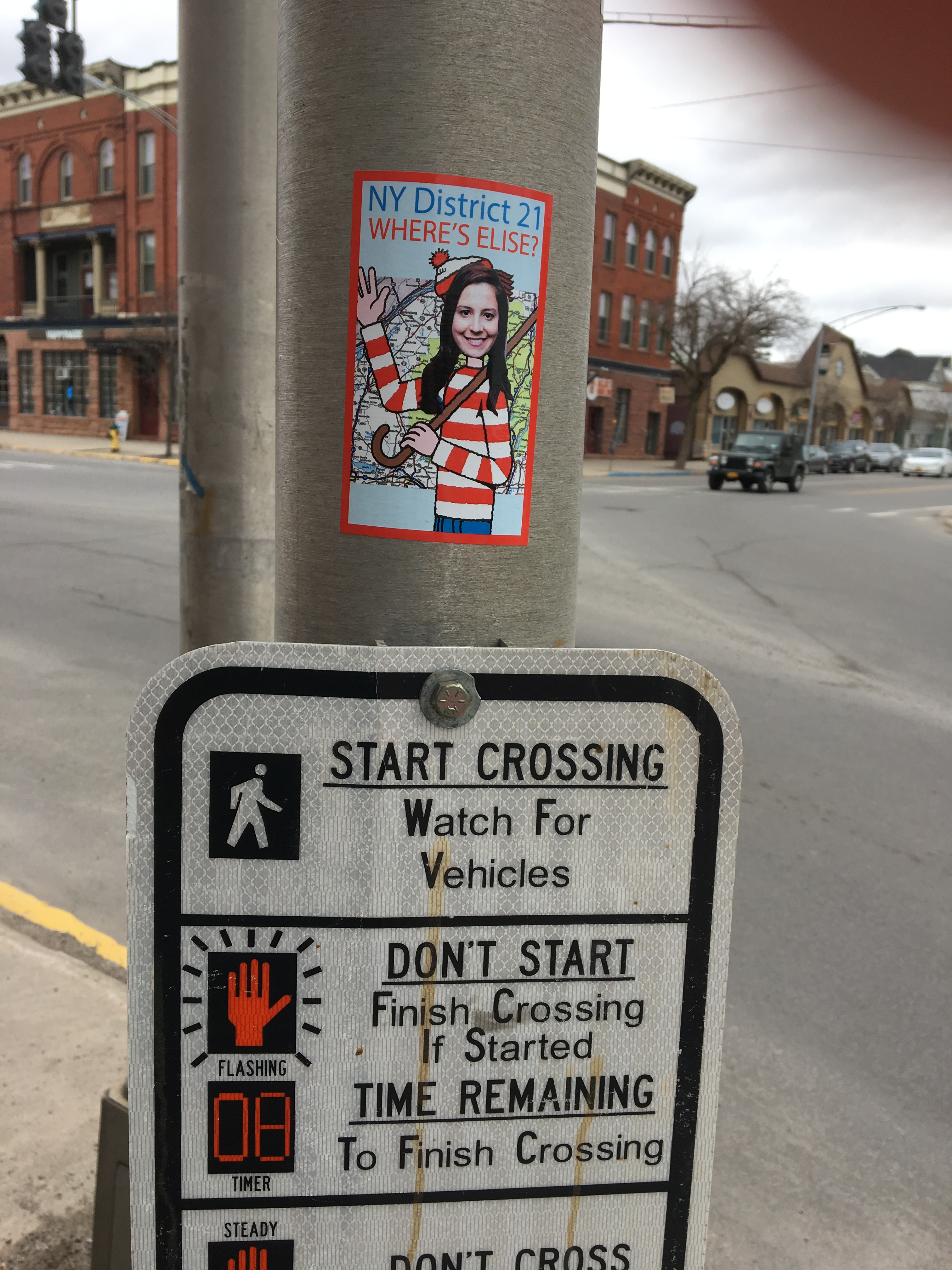 Someone else put up that sticker in Potsdam, I swear.

A group of us organized a non-partisan “Town Hall” event in Canton with(out) Stefanik on April 15, 2017, while the Rep. was supposed to be working in the district. 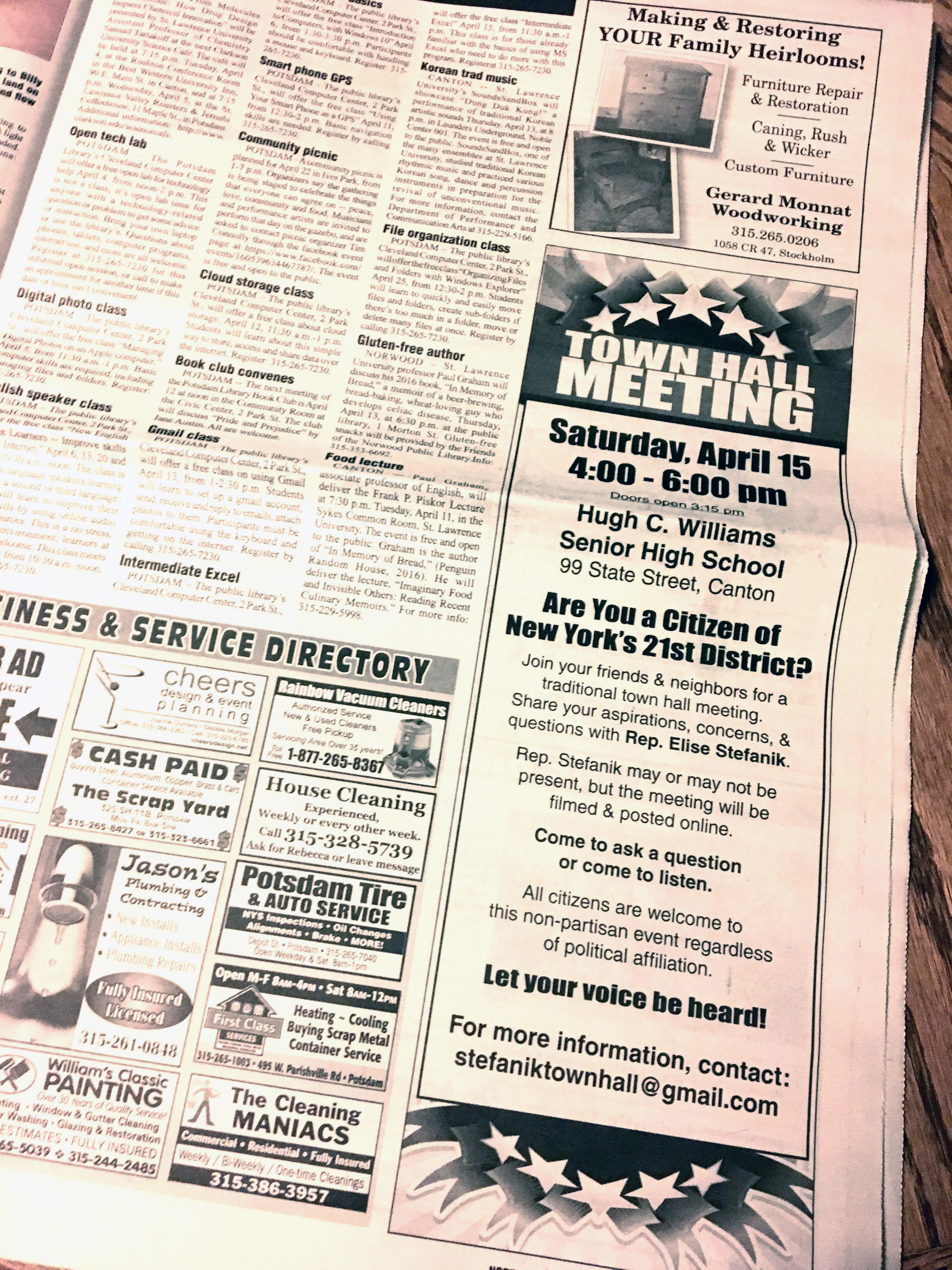 Despite the fact that it was the day before Easter, over 100 people showed up and voiced thoughtful questions and concerns.  You can see the YouTube video from the event here.

Soon after the election, I was talking with a (liberal, white male) friend of mine from work, a person whose opinion I value very much.  I was surprised afterwards by how much we varied in our responses.  He said something like, “Nothing has changed for me.  The struggle continues.”  I felt just the opposite.  For me, everything has changed.  I’ve never been so engaged in politics before in my life.  And even though my job is fairly public, I am now much more involved in the broader community.  I have many fine local leaders to work with (namely, Sara Schaff, Ben Landry, Jess Prody, and Matt Manierre).  And many new friends farther afield in NY-21, inc. Sara Carpenter, Emily Martz, Henrietta Jordan, and others.  There are also supporters who wish to remain anonymous.  You know who you are!  Thank you.

Michael Moore is right, “Democracy is not a spectator sport, it’s a participatory event.  If we don’t participate in it, it ceases to be a democracy.”