Initiated in 2015 by the Richard F. Brush Art Gallery and the Libraries and Instructional Technology (LIT) division at St. Lawrence University (Canton, NY), the People’s History Archive features selected street art stickers, posters, and ephemera from around the world dating from the 1910s to present day. Contributors include undergraduate students, young alumni, and faculty who create mini-online interpretive exhibits using items from a Street Art Graphics digital archive and/or from items contributors have selected themselves through off-campus research projects. Items can also be viewed on an interactive timeline and map. 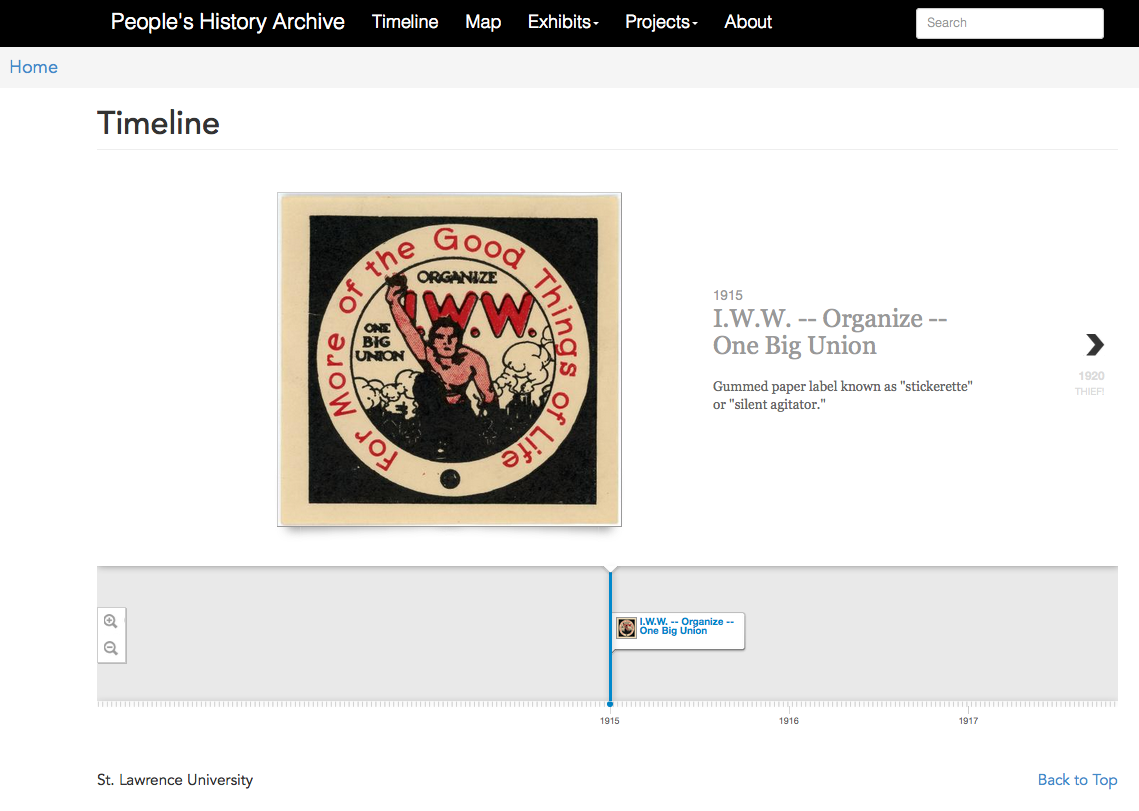 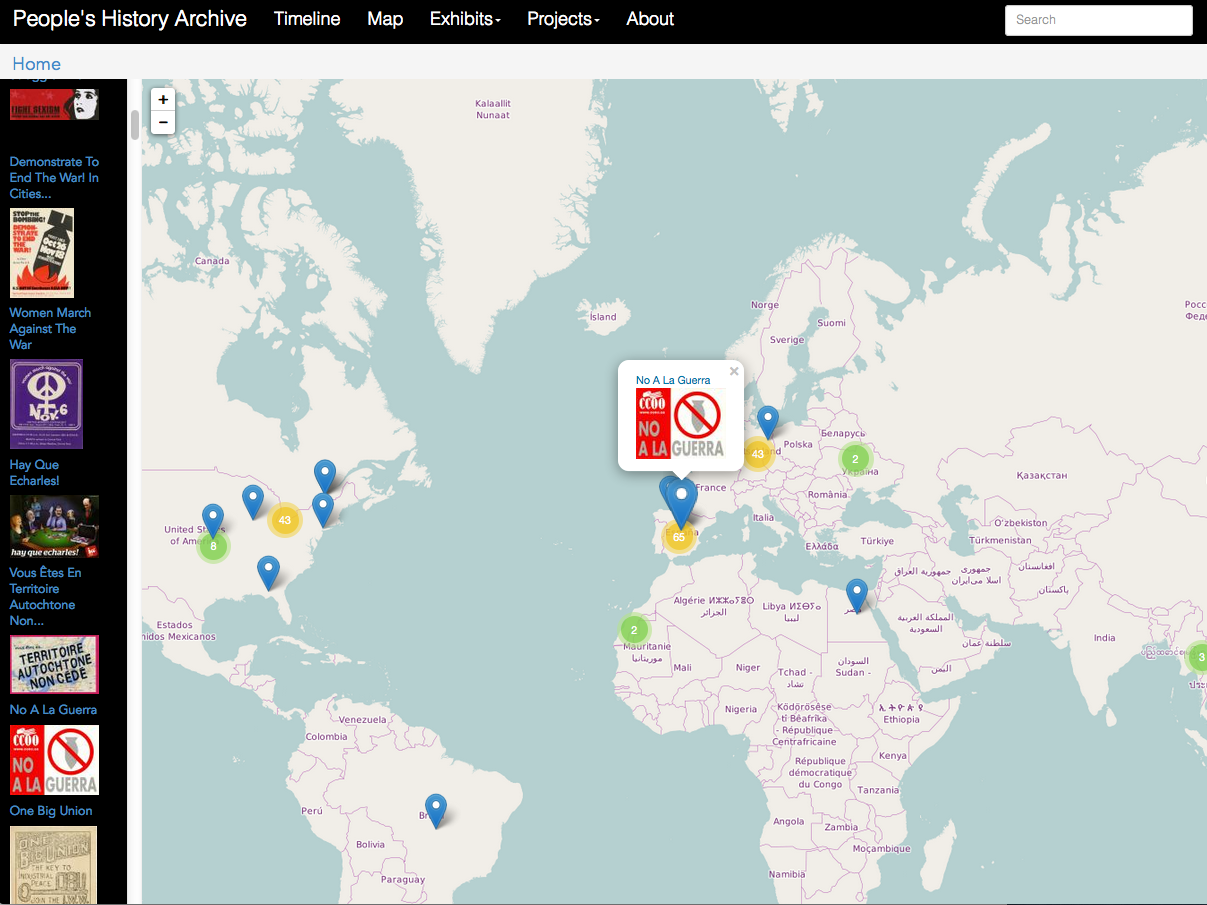 The original Street Art Graphics digital archive was created in 2004 in a platform called ContentDM, and it now features over 2,600 stickers with another hundred posters, fliers, city cards, one-of-a-kind drawings by street artists, and other street-based ephemera. In 2015, the U.S. Council of Independent Colleges selected the Street Art Graphics collection as one of 42 projects across the country to be included in Artstor’s Shared Shelf Commons, an international digital library of arts and sciences. St. Lawrence received a four-year grant to migrate and build the collection and to enhance its use in teaching and scholarship.

The People’s History Archive also represents a collaboration between the Street Art Graphics digital archive and the Weave, an independent news media project created in 2006 and headquartered in the Global Studies department. Catherine Tedford, gallery director, and John Collins, professor of Global Studies, received a four-year mini-grant from an Andrew W. Mellon Foundation Humanities grant to St. Lawrence University entitled “Crossing Boundaries: Re-envisioning the Humanities in the 21st Century.” One component of the project, Weaving the Streets, offers contributors the opportunity to write investigative blog posts about topics of interest that are under-reported in mainstream news media.

The People’s History Archive was built in Drupal by Eric Williams-Bergen, Director of Digital Initiatives at St. Lawrence University.

For more information, see my previous post Weaving the Streets & People’s History Archive (WSPHA) from last year. It’s been fascinating to see the project unfold and to see how websites are conceptualized and designed. There are still a few tweaks to work through, but with this post I’m now ready to go public with it. A dream come true! The subtitle for the site is “street art stickers, posters, ephemera – documenting the creative and complex ways people make use of public space.” The site will feature scans of physical items (i.e., not born-digital photographs, which are featured on the Weaving the Streets blog).

At this point, the plan is to have four umbrella projects and multiple exhibits within each.

Paper Bullets: My work on political stickers from around the world – under construction. I created one exhibit on U.S. Industrial Workers of the World I.W.W. “Stickerettes” or “Silent Agitators” as a model to show students; additional exhibits will follow.

Pegatinas Políticas: In the summer of 2015, Laurel Hurd ’16 expanded her Weaving the Streets experience with an SLU Student Research Fellowship, in which she added approximately 75 Spanish street art stickers to the People’s History Archive and wrote four exhibits: 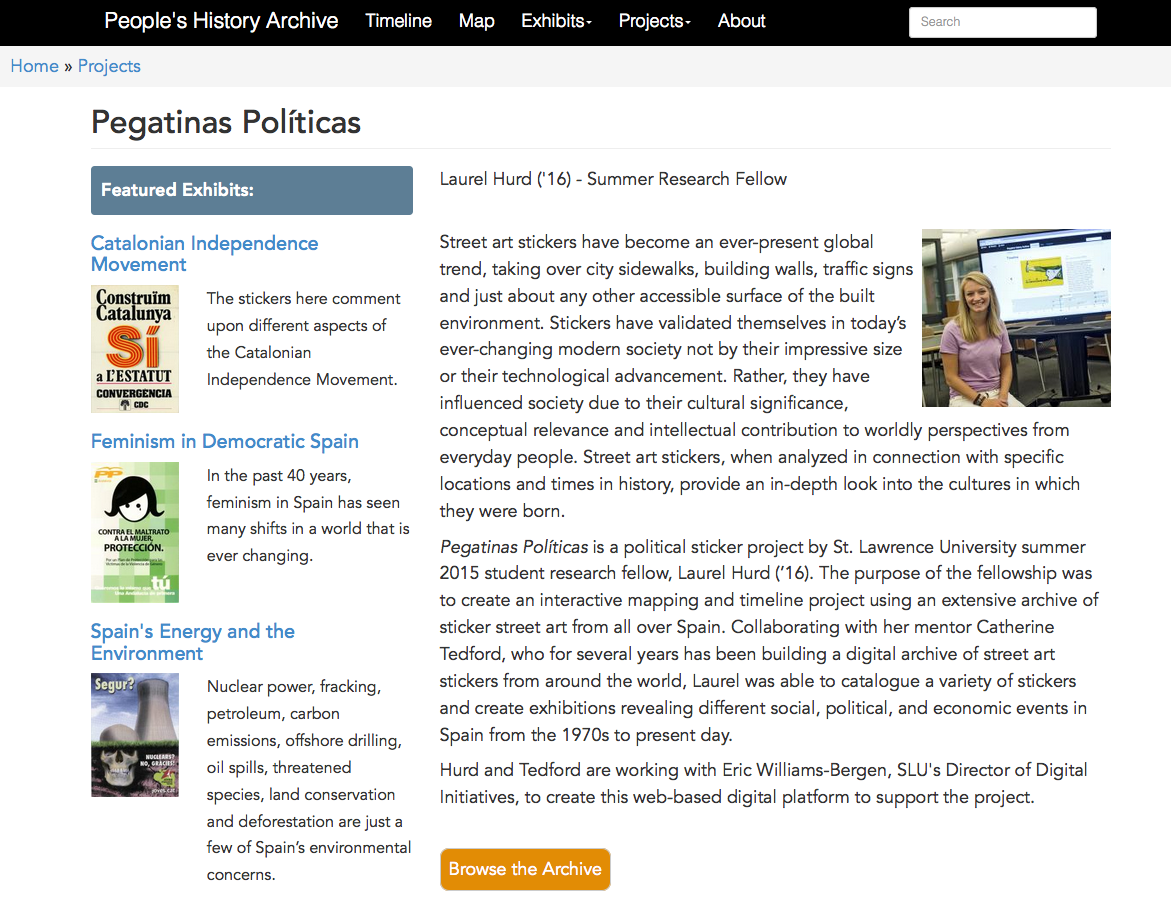 Street Art @ SLU: Work from students in my street art course – under construction. To date, one exhibit by Rebecca Clayman ’17 has been published on the German Feminist Movement (1970s to present day). Another two exhibits will be published soon on indigenous/Native American stickers and on culture jamming. 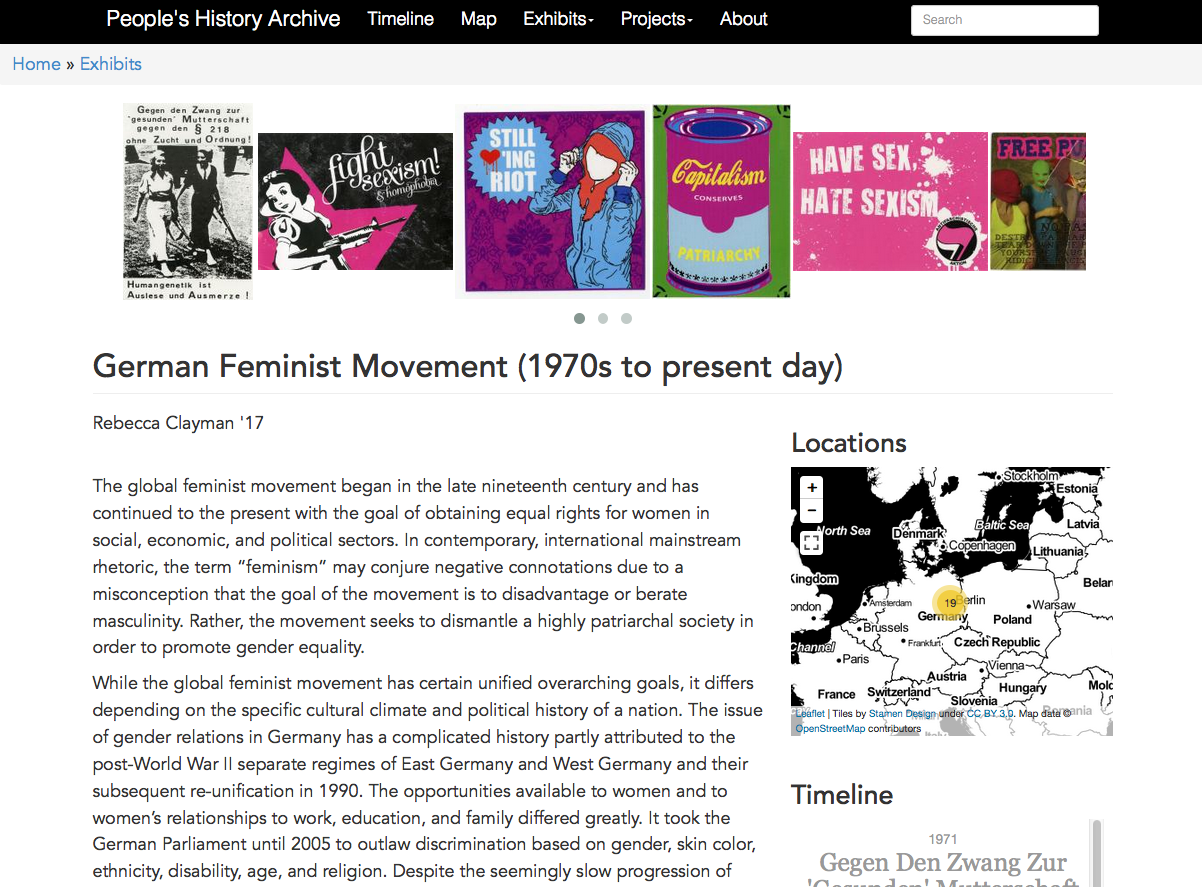 Weaving the Streets: Work by students and young alumni in the Mellon Humanities grant-funded project – under construction. Sean Morrissey ’16 is working on an exhibit on tourism in Thailand. Carolyn Dellinger ’16, the student who catalogued a group of German spuckies in 2014, is also working on an exhibit on environmental issues and animal rights in the UK.