For the upcoming assignment at St. Lawrence University to have Marina Llorente’s students analyze political stickers from Spain, I decided to split the project into two parts. Part One will ask students to annotate the images, and Part Two will ask students to use the annotations to write about what the stickers mean (i.e., what are the larger issues that the stickers point to?). I’m doing it this way now because the last time we offered the assignment, students did well contextualizing the stickers but sometimes forgot to describe all of the textual and visual elements of the stickers. Those descriptions are important in a digital archive because people access images through word searches. If descriptive words are missing, access is curtailed. Descriptions fields are so thorny! If you think about it, one needs to list everything in the sticker, but one also needs to provide historical and cultural background and draw attention to issues beyond the sticker itself. Below is what I prepared for Part One of the writing assignment using this sticker from the Izquierda Anticapitalista (Anti-capitalist Left). 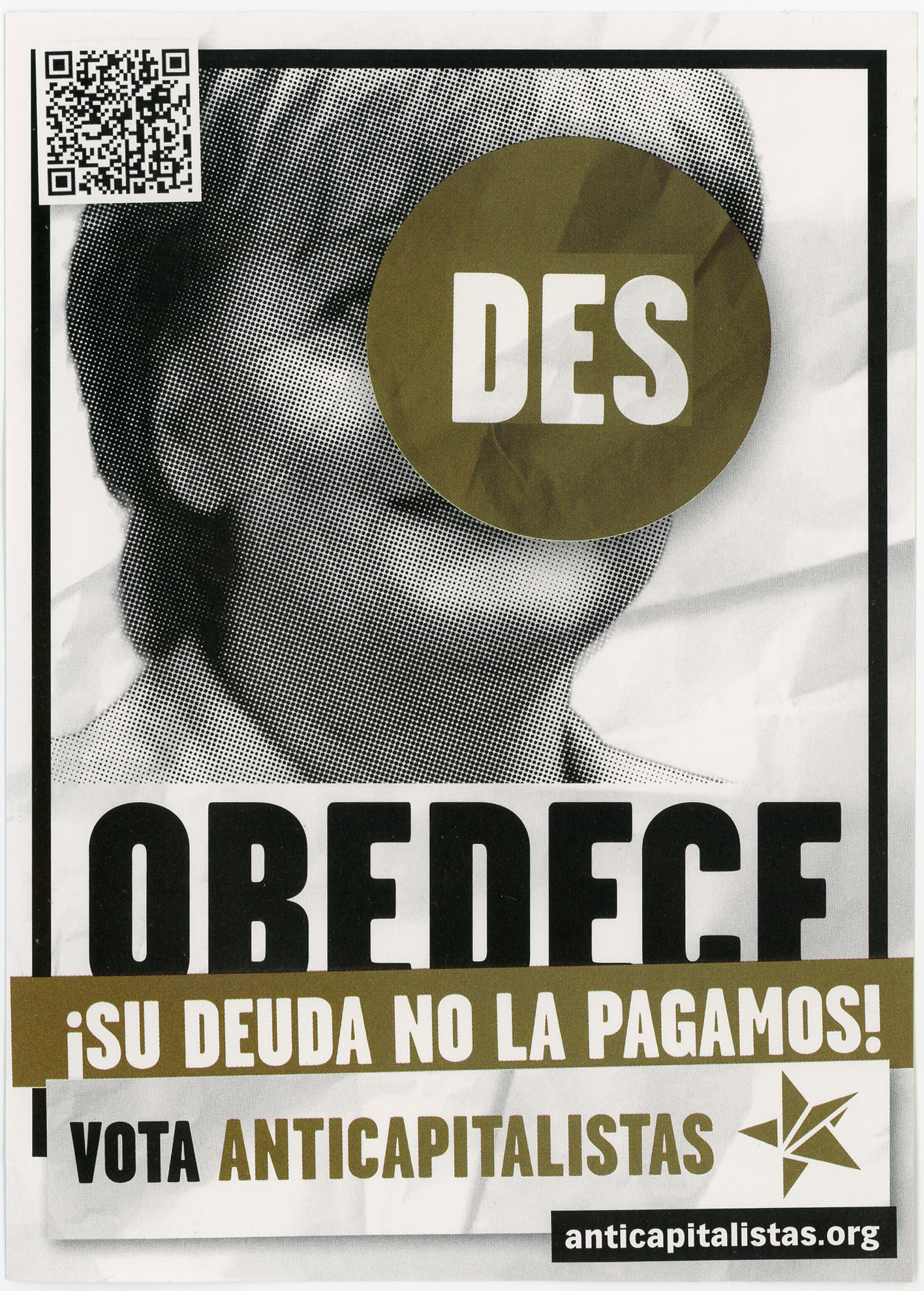 For this assignment, you will be analyzing political street art stickers from Spain for a Street Art Graphics digital archive that is publicly available on the gallery’s Web site:

1. The first step is to annotate the images. This will help you with your analysis.

2. Open the image file in Preview and click on Tools/Annotate/Text.[1]

3. Choose a contrasting color and type large numbers onto all of the visual and textual elements in the image including each line of text, the images, logos, Web sites, and anything else. Number these elements in a way that makes logical sense. The most important elements should be listed first. Every element in the sticker is there for a reason, so it’s your job to figure them all out. After you number the elements, save and close the file. If you need to re-number anything, you’ll need to re-start with the raw image file again (once the numbered file is saved and closed, it locks the annotations in place). You’ll see below how #1A, #1B, #1C, and #1D all indicate text; #2 indicates a face; #3 indicates a logo; #4 indicates a Web site; and #5 indicates a QR code. 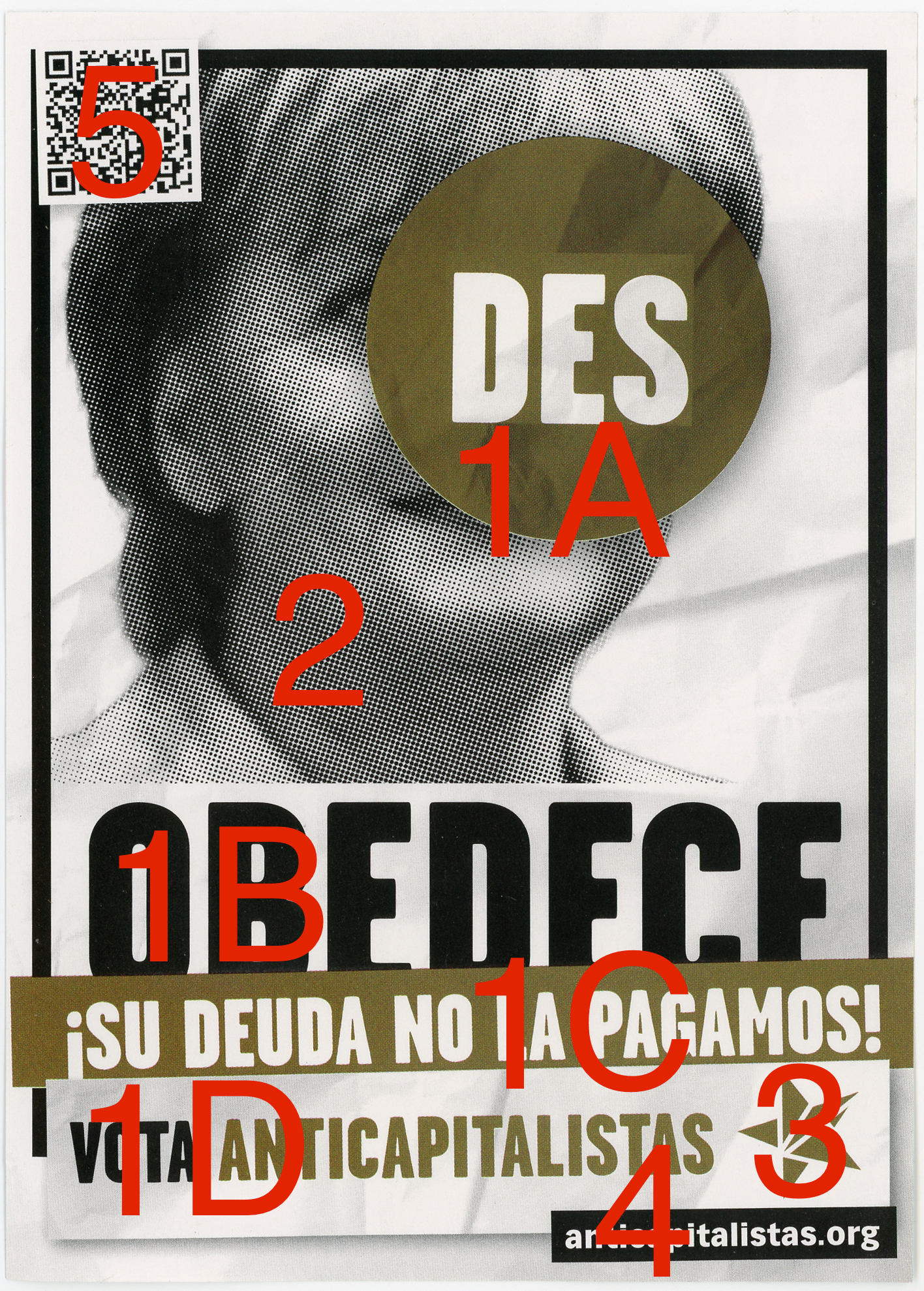 #1 text: Type all of the text that appears in the sticker in a way that makes logical sense. For cataloguing purposes, the first letter of each word is capitalized, and the remaining letters in each word should be small (not capitalized). Use a dash between different sections of the text so that it reads in a normal, common sense way. If the text appears in Spanish, translate it into English in the same fashion. Any and all Spanish text in the sticker should be in written in italics.

#2 image/color: Identify who or what is being represented in the image (people, objects, buildings, graphic design elements, color, composition, i.e., everything!) and include any other information that seems relevant or important. Be as specific as possible. For example, in my description below, see how I put “photo portrait” of Angela Merkel instead of “picture,” “drawing,” “illustration,” etc. “Portrait” here also implies head vs. her entire body in action. I also noted who Merkel is and how the type font affects our interpretation of the text. In terms of color, most stickers are either black on white or black and other colors on white.

#3 logo: Describe the logo’s shape, color, etc. and what the logo suggests. Does it play off any other existing logo (i.e., is it a form of “culture jamming”)? HINT: Take a close-up screen shot of the logo and drag the image file into Google Images and see what you find. It’s a handy way to see if and how the logo relates to anything else. Sometimes, it’s the only way to find out!

#4 Web site: Describe the purpose or function of the organization that created the sticker.

#5 QR code: Find the Web site where the QR code sends you. Is it something else besides the organization’s main Web site? What is the purpose of the Web site?

#2 image/color: Photo portrait of German politician Angela Merkel, Chancellor of Germany (2005-present). Her face is covered by a large circle that hides most of her eyes, nose, and mouth. The use of a bold graphic type font suggests an urgent appeal for a response. Black and army green on white.

#4 Web site: www.anticapitalistas.org for Izquierda Anticapitalista or Anti-capitalist Left, a Spanish revolutionary, ecologist, feminist, and internationalist organization that fights against all kinds of exploitation, oppression, and domination over people and the environment. The full-color logo in red, purple, and green signifies the different ideas that the organization supports: socialists or communists (red), feminists (purple), and green movements (green).

#5 QR code: A QR code on the sticker points to the Web site http://www.anticapitalistas.org/elecciones2011/index.html, which encourages people to vote for an alternative anti-capitalist government during the Spanish general election on November 20, 2011. The Web site states, “El 20N desobedece” or “The 20N disobeys.

Part Two: Writing a 150- to 200-word analysis of the sticker, placing it in a social and historical context. More information to follow!