Last weekend, I found four copies of a “white power” sticker stuck on street poles and signs in a small town called Potsdam near where I live and work (a place that gets few stickers, if any). Potsdam and Canton, ten miles down the road, are both college towns in rural, northern New York with four universities and several thousands of students. Canton is the St. Lawrence County seat. Our closest big city is Ottawa, the capital of Canada. I call this part of the state purple after NY Congressional District 21 voted twice for Barack Obama in the U.S. Presidential elections in 2008 and 2012. The “North Country,” as it’s called, like other rural parts of the country, shifted to red in 2016 and voted for Donald Trump. 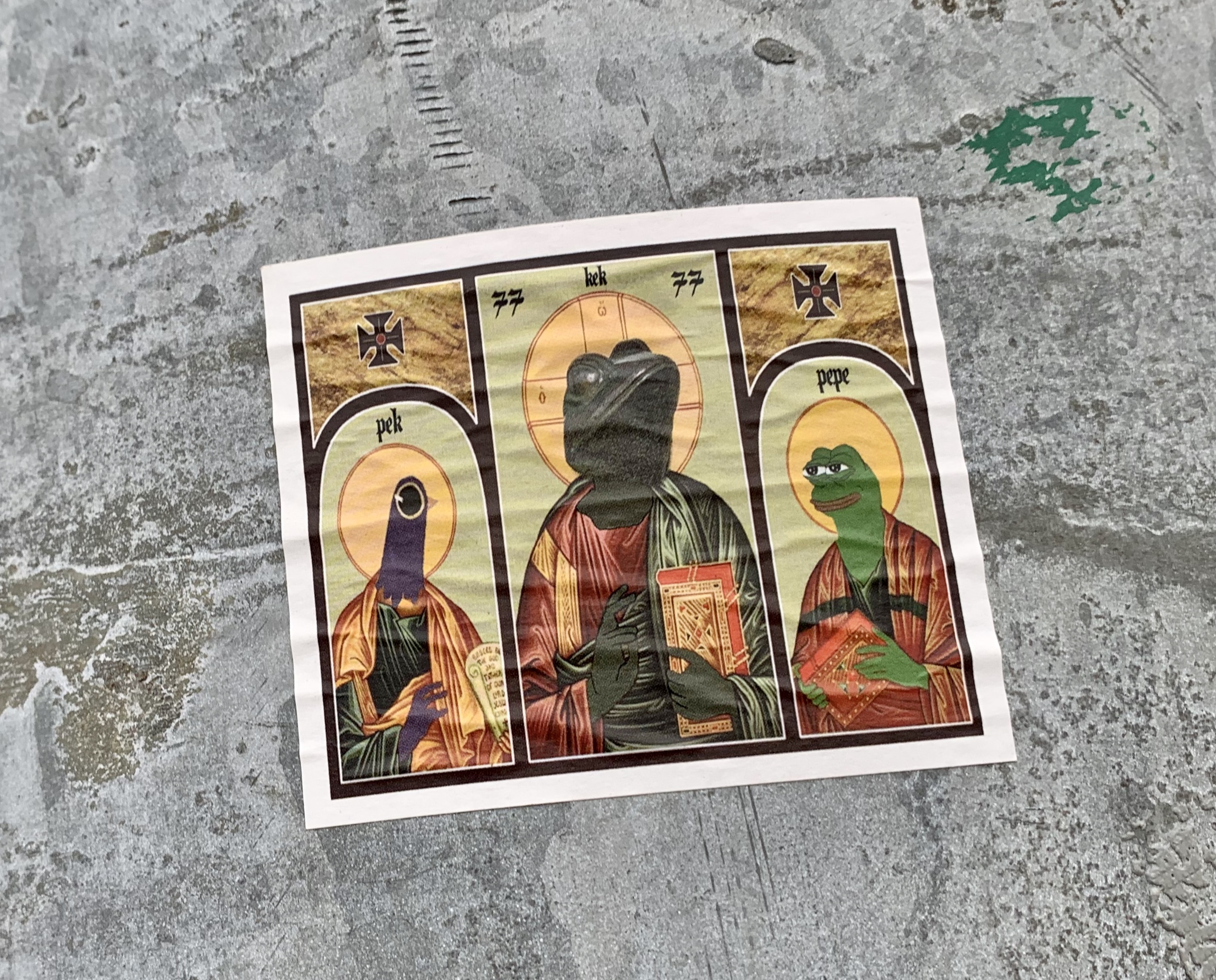 I recognized the “Pepe the Frog” image on the right fairly quickly (thanks, social media!), but the other two cartoon figures were new to me. I posted a photo of the sticker on Facebook and received several links to articles that have helped me make sense of the images (see bibliography below), as well as suggestions for follow-up. Two of the four stickers had already been defaced when my posse partner Bill and I found them. We defaced a third one by scratching it off with a car key and removed the fourth sticker intact.

After prompts from people in the community, I decided to contact the Anti-Defamation League (ADL) and report what happened under the organization’s category of “witnessing a hate incident.” A staff member called me back to ask where exactly the stickers had been placed. He also said I should report the incident to the local authorities as suspicious activity involving the defacing of public property. He indicated that it would be useful to track the stickers geographically across the state to see if others show up.

According to the ADL’s extensive Hate on Display Hate Symbols Database, “Pepe the Frog is a popular Internet meme used in a variety of contexts. In recent years, it has also been appropriated by white supremacists, particularly those from the ‘alt right,’ who use it in racist, anti-Semitic or other hateful contexts.” A website called Know Your Meme (KYM) also has a long list of examples of the original and early uses of Pepe the Frog as an Internet phenomenon and the more current appropriation of the cartoon image by right-wing groups to send hateful messages.

In the past few years, Pepe has been linked directly to Donald Trump (and to the French nationalist politician Marine Le Pen) on websites and platforms such as 4chan, Reddit, and Twitter. The KYM website states, for example, that “On October 13th, 2015, Donald Trump tweeted an illustration of Pepe as himself standing at a podium with the President of the United States Seal. Within 16 months, the post gathered upwards of 11,000 likes and 8,100 retweets.” In January 2016, Russia’s London-based embassy tweeted the news of British Prime Minister Theresa May’s meeting with President-elect Trump with a Smug Pepe meme.

In the fall of 2016, after Hillary Clinton called Trump supporters “deplorables,” Donald Trump, Jr., posted an image of “The Deplorables” on Instagram. The image plays off Sylvester Stallone’s action movie The Expendables and depicts (with the help of Photoshop) Trump’s sons, Trump, Sr., and other Republican politicians Mike Pence, Ben Carson, Rudy Giuliani, and Chris Christie, as well as the conspiracy theorist Alex Jones and Breitbart commentator Milo Yiannopoulos, both of whom were banned from Twitter for inciting hateful rhetoric. Pepe the Frog is also depicted on the image (with Trump’s hair!). 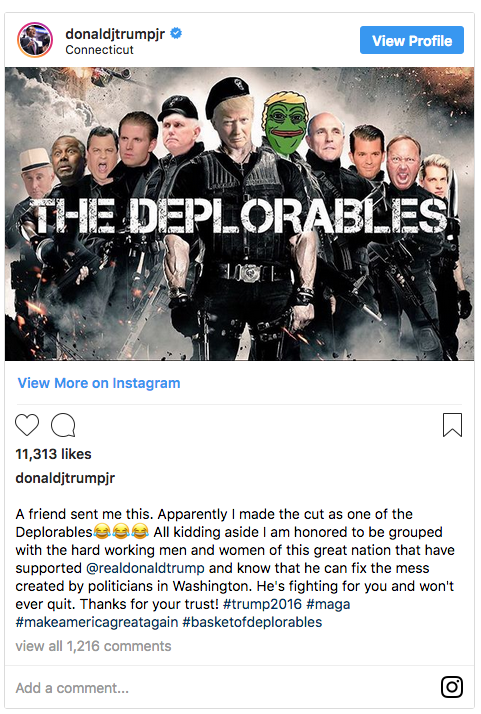 Neither “Kek” nor “Pek” featured on the sticker are listed in the ADL database, but the ADL staff member said that the organization would update the list at some point and add the two cartoon figures. I can’t figure out what “77” on the sticker means, though the two numbers add up to 14. The ADL database states that “14” is “numerical shorthand for a popular white supremacist slogan known as the ‘14 Words’: ‘We must secure the existence of our people and a future for white children.’” (“88” is another example of a number symbol that stands for “HH” or “Heil Hitler.”)

I’m not going to go into a rabbit hole to make sense of Kek and Pek right now, but check out the articles by Quincy Frey and Jay Hathaway listed below and The Cult of Kek online. I did learn that “Kek” is 4chan slang for laughter or amusement, however, and “Pek” is the purple pigeon or as Nazis call it “trash dove.”

One last thing. I did a Google image search of the sticker and found that Amazon sells them online ($19.95 for 20). Yipes!

In 2018, activists declared July 17 as #PrimeDayofAction, a protest that coincides with Amazon’s “Prime Day” on July 16. It turns out that Amazon and other similar companies are being criticized for selling and profiting off of hateful racist and fascist merchandise. A 30-page report, called Delivering Hate: How Amazon’s Platforms are Used to Spread White Supremacy, Anti-Semitism, and Islamophobia, and How Amazon can Stop It, was created by the Partnership for Working Families and the Action Center on Race & the Economy, and states:

“This report is a contribution to a growing body of work identifying Amazon and other technology companies’ ties to hate organizations. We are indebted to the ongoing work of the Southern Poverty Law Center (SPLC) to track hate organizations at Amazon and throughout our society. Color of Change has been tracking hate groups’ use of payment service providers and Amazon as a selling platform. You can see its work at http://www.bloodmoney.org. SumOfUs has been calling on Amazon to stop advertising on Breitbart News after many other major companies have done so. You can learn more at https://actions.sumofus.org/a/amazon-stop-investing-in-hate.

I will write to Amazon and ask them to remove the alt-right stickers from their website. Stay tuned!

Hathaway, Jay. A meme war is raging over the future of Trash Dove. The Daily Dot, 15 February 2017.

Neiwert, David. What the Kek: Explaining the Alt-Right ‘Deity’ Behind their “Meme Magic”. Southern Poverty Law Center, 08 May 2017.

Nuzzi, Olivia. How Pepe the Frog Became a Nazi Trump Supporter and Alt-Right Symbol. The Daily Beast, 26 May 2016.